The Roanoke Valley Preservation Foundation (RVPF) and members of the City of Roanoke’s Fire-EMS Department held a dedication ceremony of the Fire Station No. 7 historical interpretive sign, commemorating the history of the station from its original 1922 construction with an unveiling on Thursday, November 4, 2021 at 5:30pm. 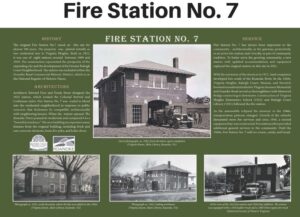 The sign commemorates the City’s commitment to preserving the history of the station located at 1742 Memorial Ave. SW, Roanoke, VA 24015. Members of the community joined Roanoke Valley Preservation Board members and Roanoke Fire/EMS staff in celebration of both the past and the future of Fire Station No. 7 in the dedication of the historical sign at the new station. 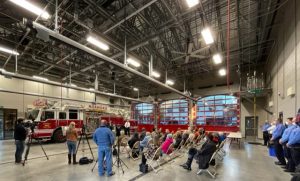 Attendees toured the inside of the station inside but were asked to wear masks respective to the City’s COVID-19 policies. The station’s Fire-EMS crew served ice cream to those who attended, in keeping with the historical spirit of the fire station as an integral part of the neighborhood.

As part of the plan to build the new station on the site, the City partnered with the RVPF to install the interpretive sign to tell the history of the original 1922 fire station and its role in the development of the surrounding neighborhoods of Ghent, Raleigh Court, and Wasena during the early to mid-20th century. While the RVPF fought to save the original 1922 station, they believe that preserving the history of the station in the neighborhood is what is most important and the sign helps to accomplish this.

In early-2021, the newly constructed Fire Station No. 7 was unveiled to the public after more than a year of work. The new station, which houses Ladder 7 and Medic 7, offers four times as much space as its predecessor, allowing modern and EMS apparatus to fit in the station’s bay. New Station 7 was designed by a team from SFCS Architects, City staff, and Fire-EMS employees whose focus was to preserve the exterior character of the 1922 station and the surrounding residential neighborhood, while providing a state-of-the-art facility for modern Fire and EMS services. Historic materials and features from the original station, including bricks, wood trim, doors, and other historical artifacts were salvaged and incorporated into the new station. 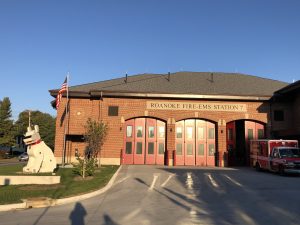 The station also continues to feature the Trojan Dog sculpture, designed by artist Ann Glover. Located prominently in front of the new station, this project of the Roanoke Arts Commission and Greater Raleigh Court Civic League is a favorite in the community.

“The historical preservation of the station has not lost sight of its history in paying tribute to the 1922 station, with the detailed refurbished artifacts from the 1922 station and community support from the RVPF,” said Chief David Hoback of Roanoke’s Fire-EMS Department. “The community effort has resulted in the Fire-EMS team being able to have expanded resources to better serve the needs and ensure the safety of the neighborhood and residents.”

To view a virtual tour of the station, watch here.