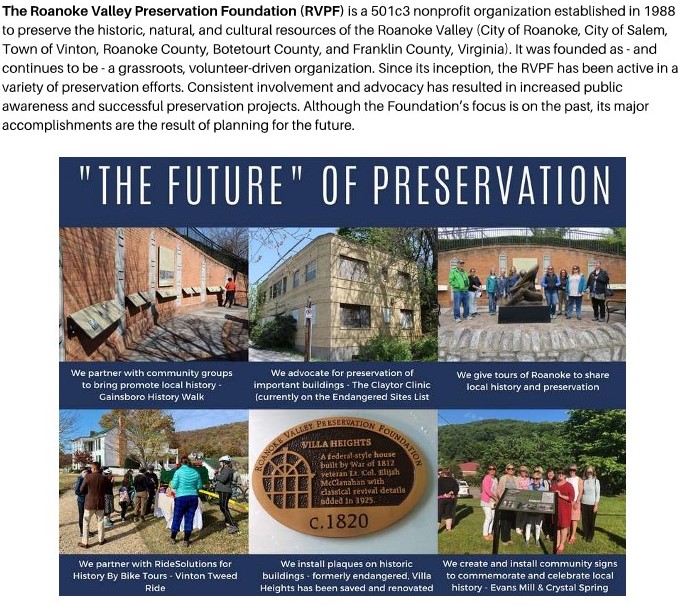 Whitney Leeson, President - president@roanokepreservation.org
Dr. Leeson is the Chair of the History Department at Roanoke College. She specializes in historical anthropology with strong interest in historical archaeology and material culture.  Most of her recent public history work has focused on the preservation of two properties on the Roanoke College campus--Clay Street House and Monterey Quarters (a slave dwelling behind Monterey).  She is also quite enamored with historic landscapes and backyard gardening despite the efforts of her welsh terrier's efforts to destroy the flowerbeds in progress.

Bob Clement, Vice-President
Bob retired as the Neighborhood Services Coordinator for the City of Roanoke in 2018. He has many years of experience in the design and development of community–based projects within diverse communities and groups. Prior to moving to Roanoke, Bob re-energized the Yorkville Historical Society in York, SC to promote and educate the residents of the value of saving and maintaining the town's historic structures and streetscapes. While there he converted his 1825 'steamboat gothic' residence from 4 apartments into a single-family home. Bob currently lives in the historic Old Southwest neighborhood in the Queen Anne residence built in 1900 by JH Marsteller, owner of the Marsteller Marble & Tile Company. In 1925, Marsteller sold his residence at auction to move out into the newly developed suburbs of Grandin Road.  His home was purchased by 2 brothers who converted it into apartments at that time.  It remained an apartment dwelling until 2003 when Bob and his husband purchased the property and converted it back into a single-family residence where they reside today.

Frederick Gusler, Treasurer
Frederick is Director of Redevelopment and Revitalization for the Roanoke Redevelopment and Housing Authority where he works on improving the City’s public housing developments and serving as the liaison to the City of Roanoke on redevelopment and revitalization projects.  Prior to his current role, he was Senior Planner for the City of Roanoke, where he worked for almost 15 years on neighborhood revitalization efforts and brownfield redevelopment, and intermittently as the Agent to the City’s Architectural Review Board. Frederick grew up in Williamsburg, Virginia where his Father and Stepmother had long careers with Colonial Williamsburg. However he has roots in the Roanoke Valley where his parents and stepmother grew up. He has lived in Roanoke since 2000.

Anne Stuart Beckett, Secretary
Anne has been involved with historic preservation for 30 years after graduating from Mary Washington College in 1990 with a degree in Historic Preservation. She later moved to Roanoke to work for the Virginia Department of Historic Resources, and afterwards served as the Preservation Planner and Agent to the Architectural Review Board for the City of Roanoke. She currently works as a Historic Preservation Specialist for FEMA. Anne has been involved with the Roanoke Valley Preservation Foundation, Inc. since moving to Roanoke in 1997 serving in various capacities.

Jordan Bell - Jordan Bell is a Gainsboro resident, community activist, and teacher in Roanoke City Public Schools. Jordan has given tours to hundreds of people of the historical Gainsboro community. He is currently putting together a documentary on the Gainsboro history and a book to go along. Jordan is a father, brother, and son.

Alison Stone Blanton - Trustee since 1998, Alison is an architectural historian and preservation consultants, who works for Hill Studio, where she is responsible for cultural and historic preservation projects. Alison has worked with planners, architects, economists, attorneys, and developers on various Historic Tax Credit projects in Virginia, as well as in other states. She has completed numerous National Register nominations, both individual properties and historic districts, as well as county-wide surveys of historic resources throughout Virginia. Alison consults frequently with State Historic Preservation Offices and the National Park Service and assists in coordinating Section 106 review for projects involving historic resources with state agencies.

Lynsey Crantz-Allie - Trustee since 2019, Lynsey is a Roanoke native.  She attended Roanoke College where she received her BA in History.  She went on to get her Masters in Archival Studies from Clayton State University.  She is a certified archivist through the Academy of Certified Archivists.  She is currently the Museum Manager for the Historical Society of Western Virginia, where she has worked for the last four years.  Lynsey has always had a passion for history and hopes that through her work, she can help preserve the past for future generations.  In her spare time, Lynsey loves to travel with her husband and read.

Whitney Feldmann - Whitney has a BA in History from Mary Baldwin College and an MFA from Hollins College. She taught high school history for a number of years.  She is a native Roanoker with Botetourt County ties.  Her 200 acre family farm is now held under a conservation easement by VOF and Whitney has recently installed a conservation plan on the property using BMP and CREP practices (which included planting 900 trees). Formerly a partner in  Landmark Tours where tours of local landmarks were emphasized, Whitney continues to be involved with local history, preservation and conservation., currently serving on the boards of the Roanoke Valley Preservation Foundation, the Blue Ridge Land Conservancy, and the Garden Club of Virginia’s Conservation Committee. Her love of history includes membership in the DAR and Colonial Dames.

Katie Coffield Gutshall -Trustee since 2014, Katie is a Preservation Planner with Hill Studio in Roanoke. She regularly works on National Register nominations, historic district surveys, and historic tax credit projects. Katie holds a BA in Urban & Environmental Planning from the University of Virginia and a MA in Historic Preservation Planning from Cornell University. Prior to moving to Roanoke, she worked as a planning consultant in Albany, New York. Katie currently serves on the City of Roanoke Architectural Review Board.

Judy Harrison - Trustee since 2014. Judy is a lifetime resident of the Roanoke Valley.  After 33 years of service with Carilion Clinic she retired in 2010.  Judy now works part time at Jefferson Center and spends her spare time visiting with friends, reading and volunteering with several organizations.  She spends a considerable number of weekends and vacations traveling to visit historic towns, buildings and homes. Judy is an ardent advocate for saving historic buildings and has always been interested in history and old buildings.

Kate Kronau - Trustee since 2108, Kate received her BA in American Studied from UVa and MA in Historic Preservation and Conservation from The Washington University. She is a Roanoke native and works for Hill Studio as a Preservation Associate.

Molly Meredith -Trustee since 2009. Molly received her B.A. in American Studies and Master of Arts in Liberal Studies from Hollins College. She has worked as a college admissions officer, an architectural historian, preservation program manager, and is currently in sales. Molly wrote the publication An Historical and Architectural Guide to Hollins College and completed two National Register of Historic Places nominations: Evergreen in Franklin County and Appomattox River Bridge in Appomattox County. Molly assisted with the historic property surveys of Botetourt County and Henry County. Molly is a very passionate opponent of vinyl replacement windows on houses built before the 1940s.

Megan Mizak - Megan has worked at the Gainsboro Branch of Roanoke Public Libraries since 2011. Since working at the library, Megan has curated, maintained and preserved the library's Virginia Y. Lee Collection, which is composed of rare books, historical documents, photographs and reference materials that focus on African American history in the Roanoke Valley. As a dedicated public servant devoted to maintaining community connections and local history, she has sought out and fostered relationships with local community members, regarding the roll of Roanoke Public Libraries' interest in historical preservation.

Evelyn (Evie) Slone founding member & Trustee Emerita. Evie is a professional land and development planner and has worked in both local government (City of Roanoke) and as a private consultant (Hill Studio). Over the past twenty years, Evie has helped establish and administer local historic districts, advocated for significant historic properties and neighborhoods, and facilitated development alternatives to preserve historic properties. Evie has particular interest in family history and traditions as well as promoting the community’s important people and places. ‘It gives us “roots” and appreciation for who we are and where we live today!’

One thought on “About Us”